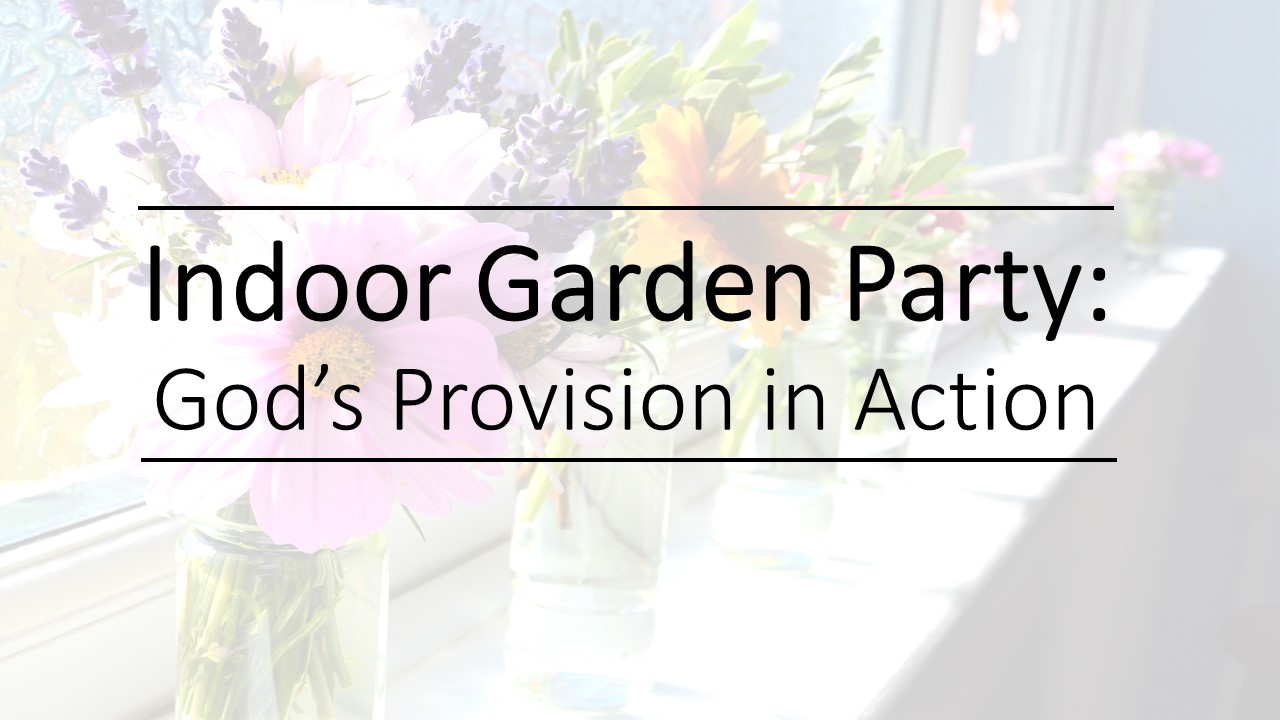 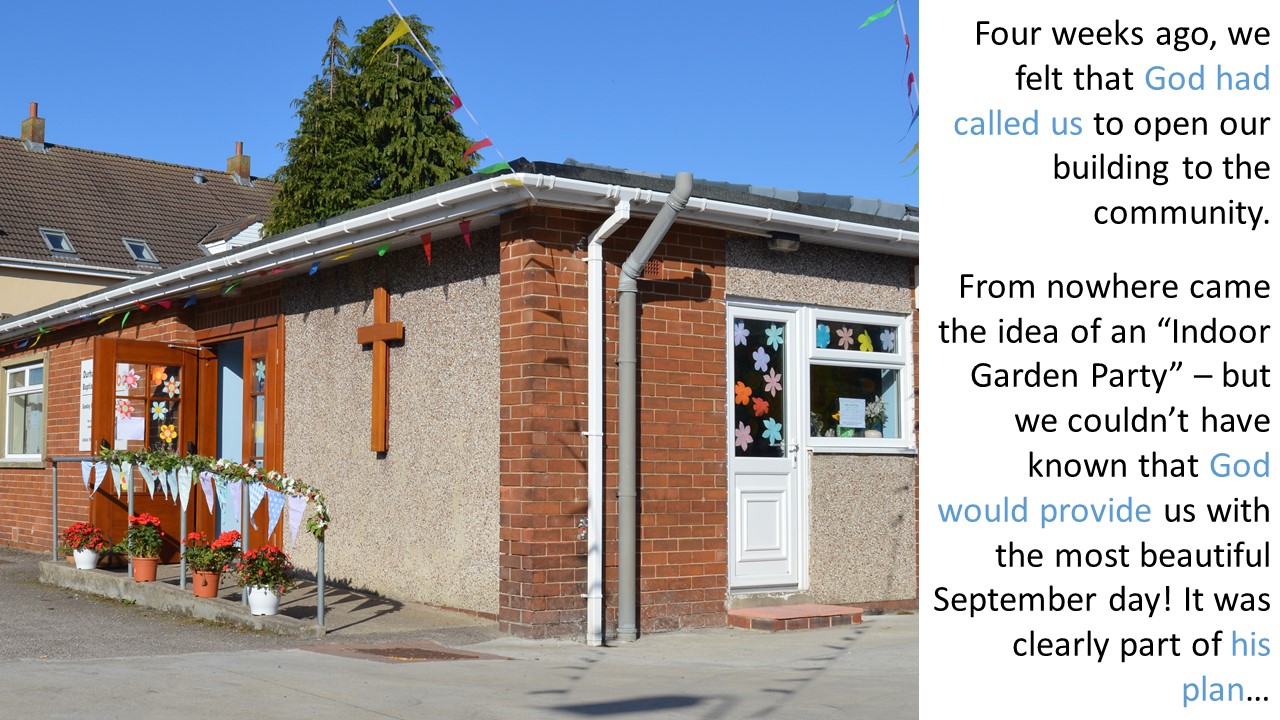 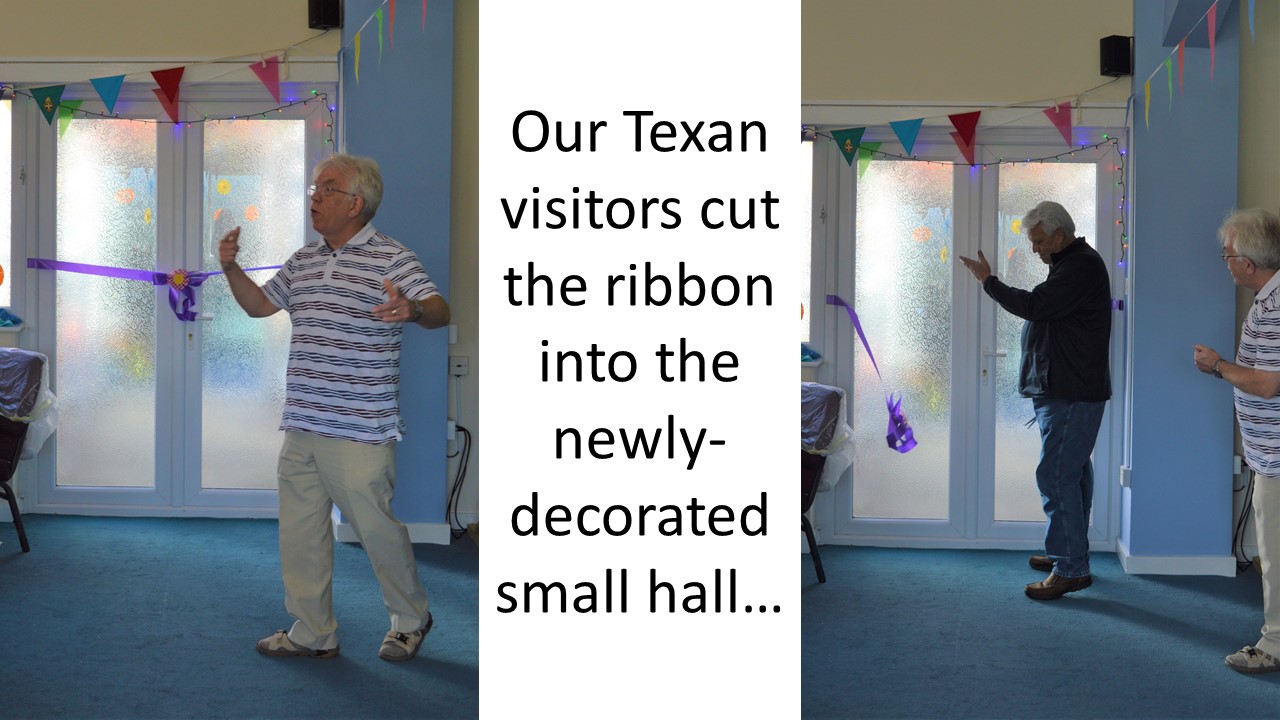 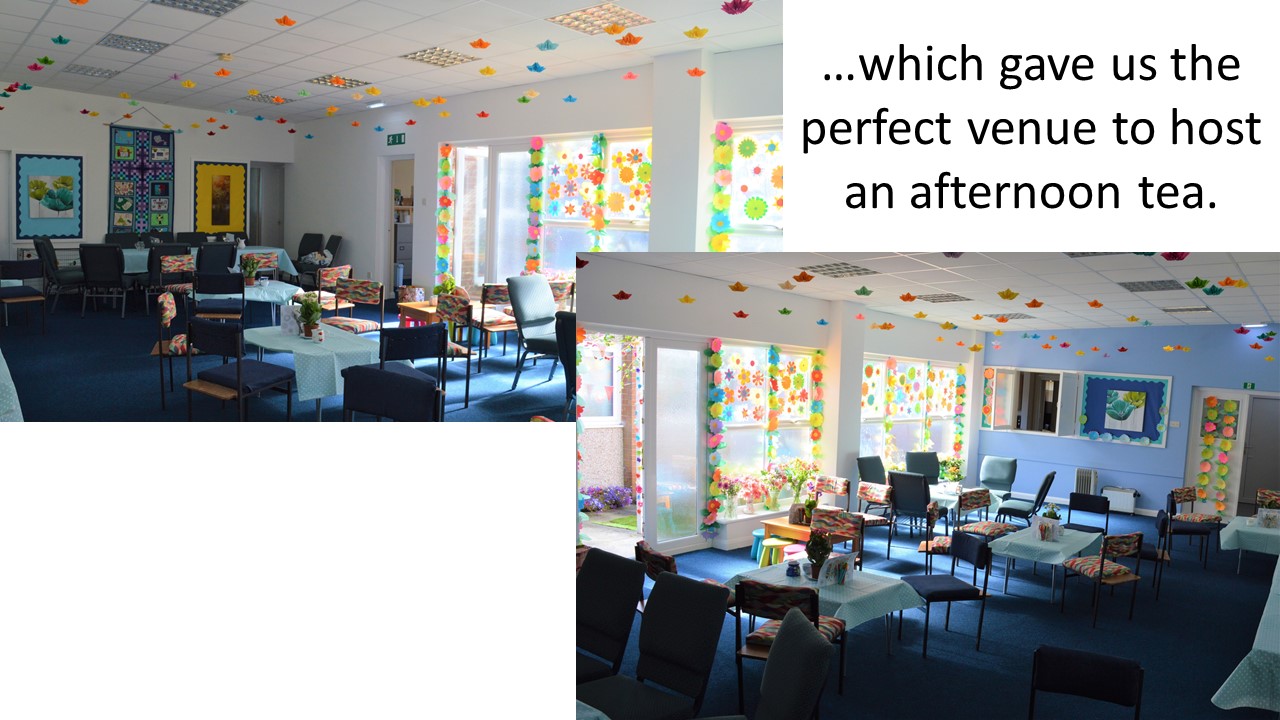 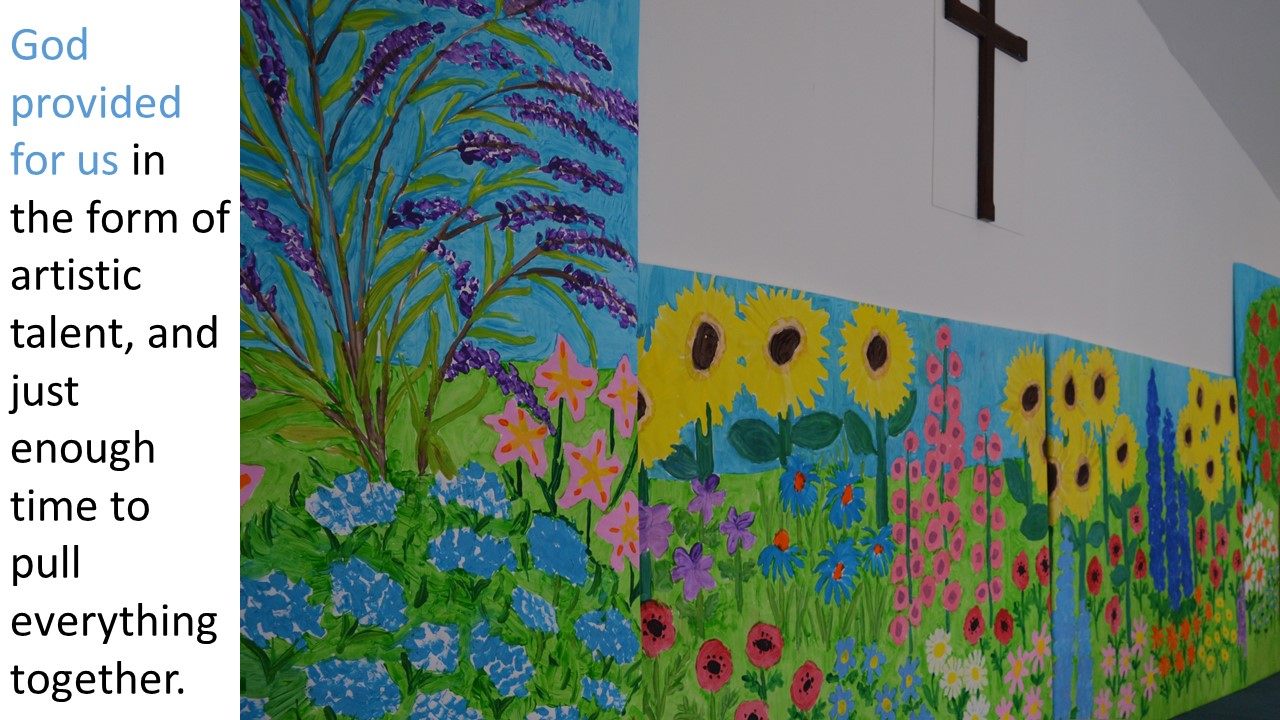 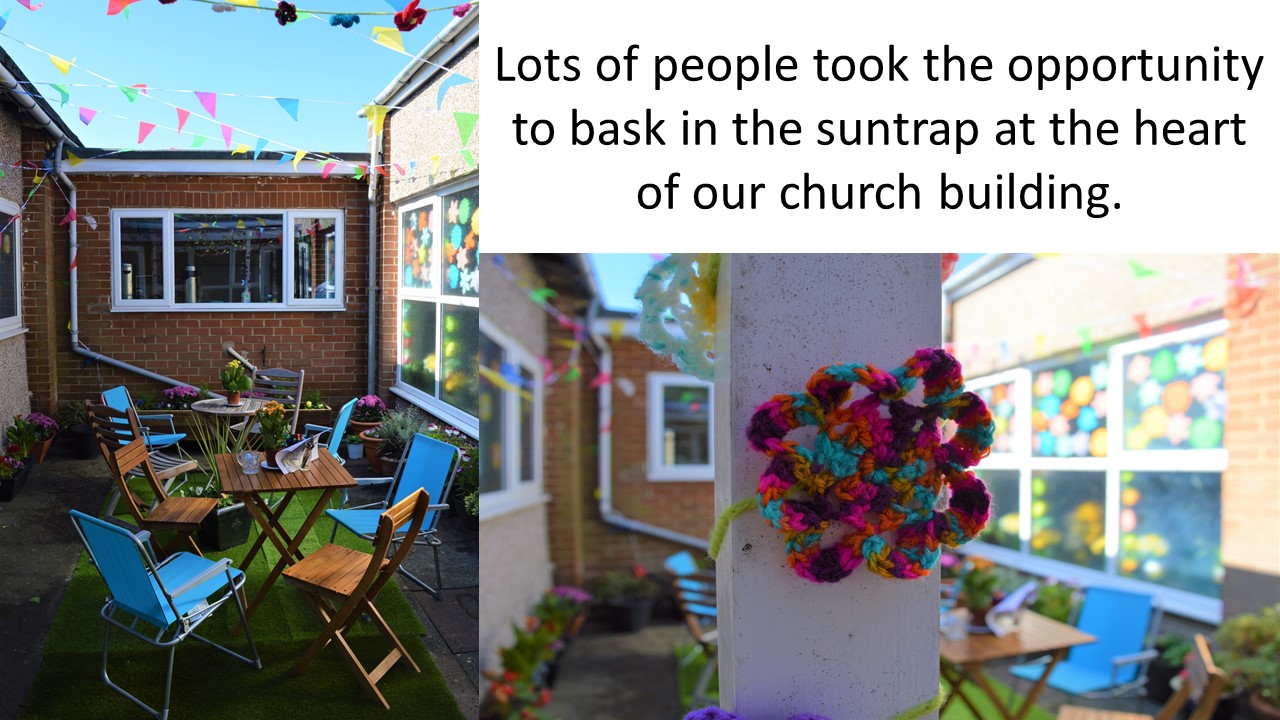 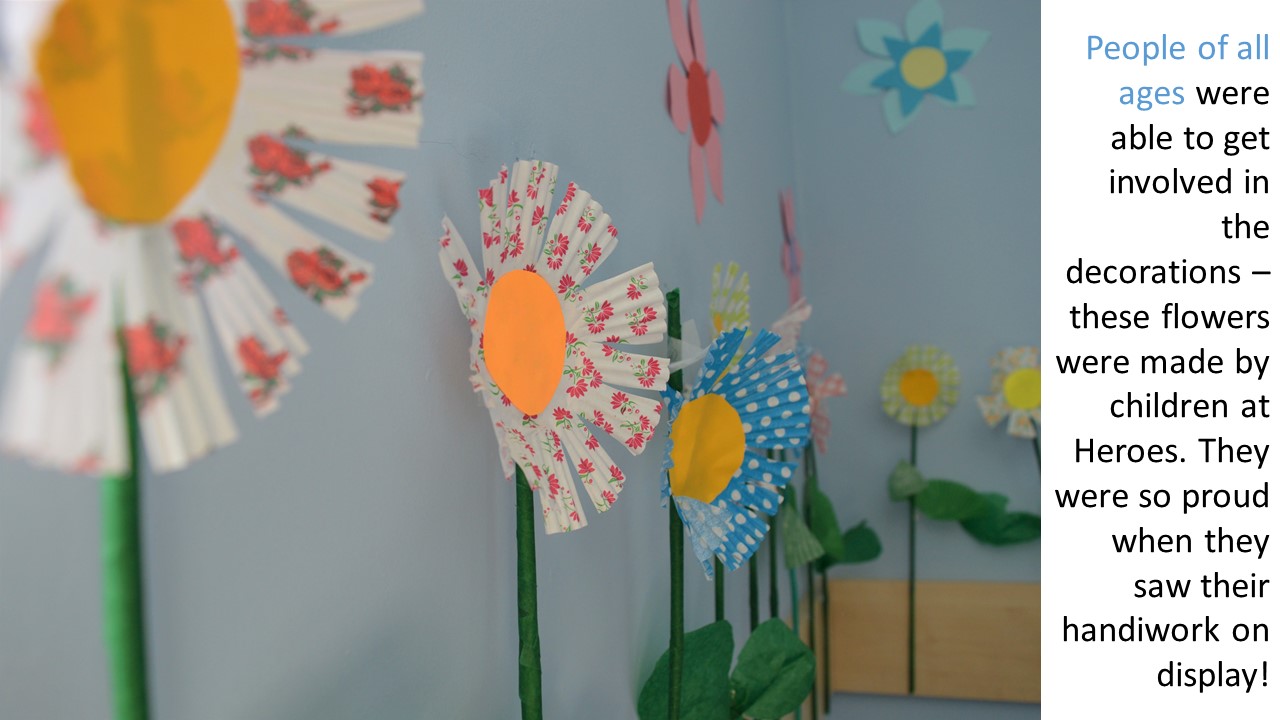 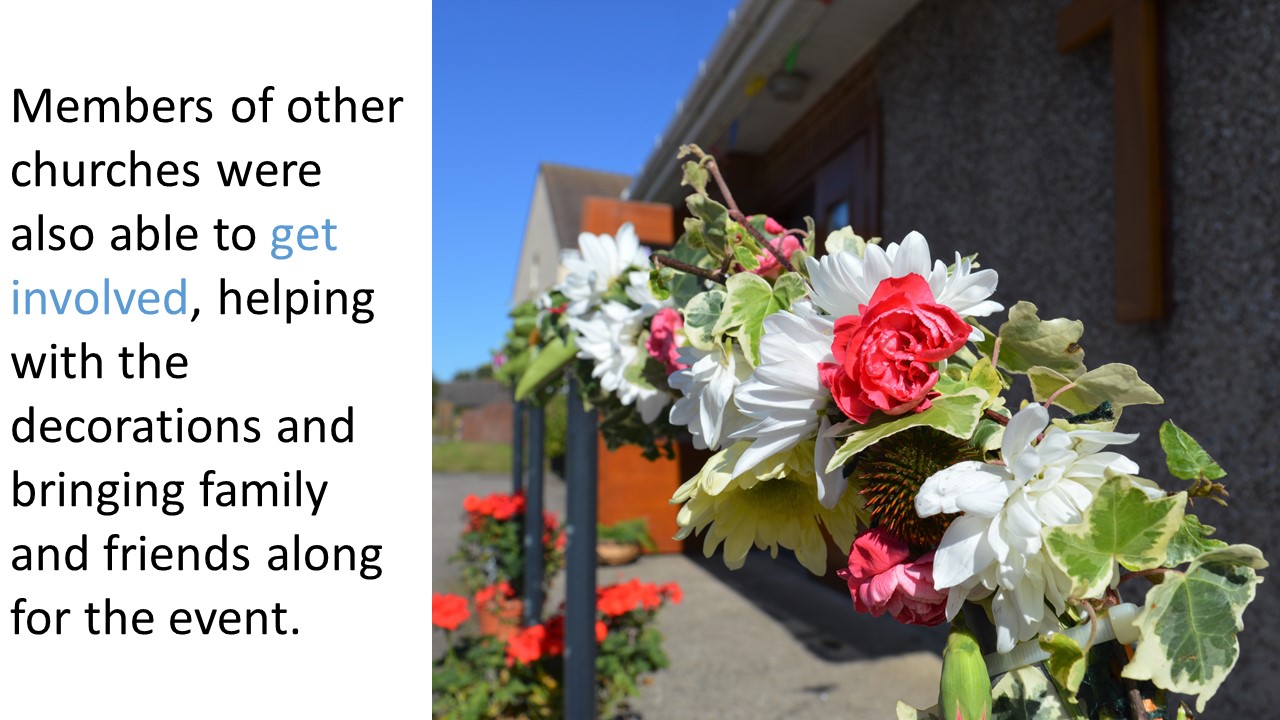 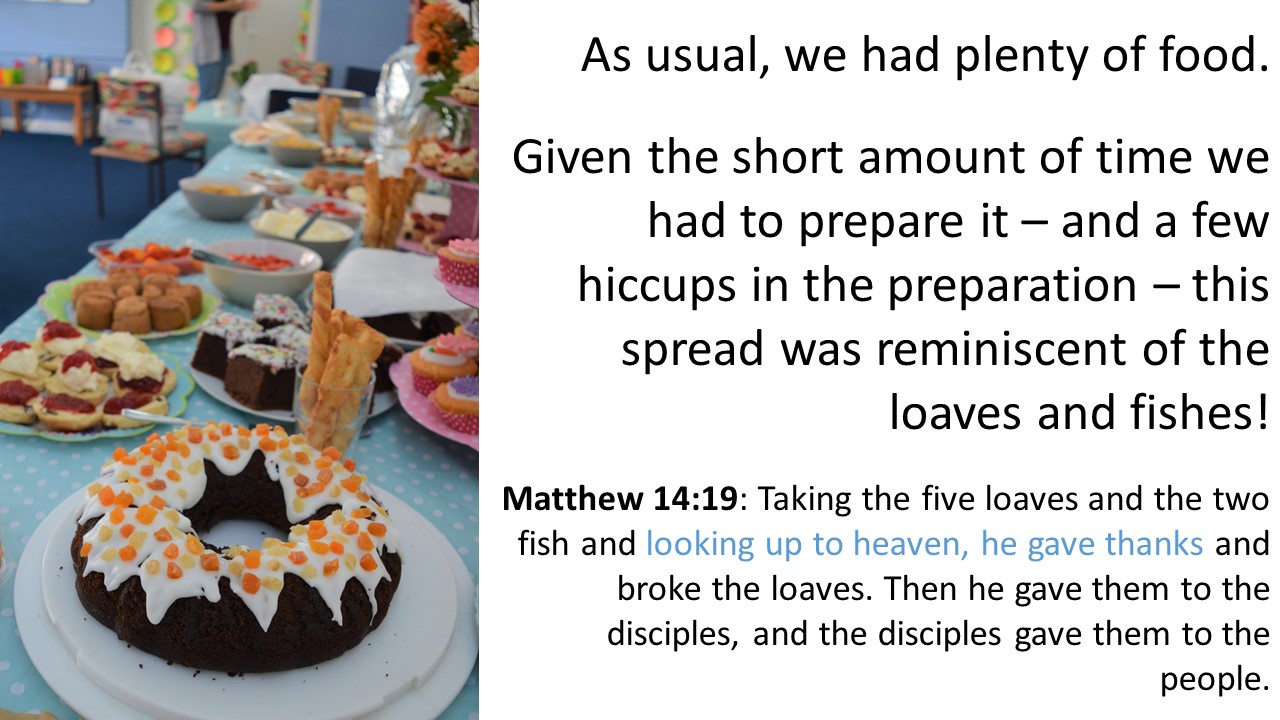 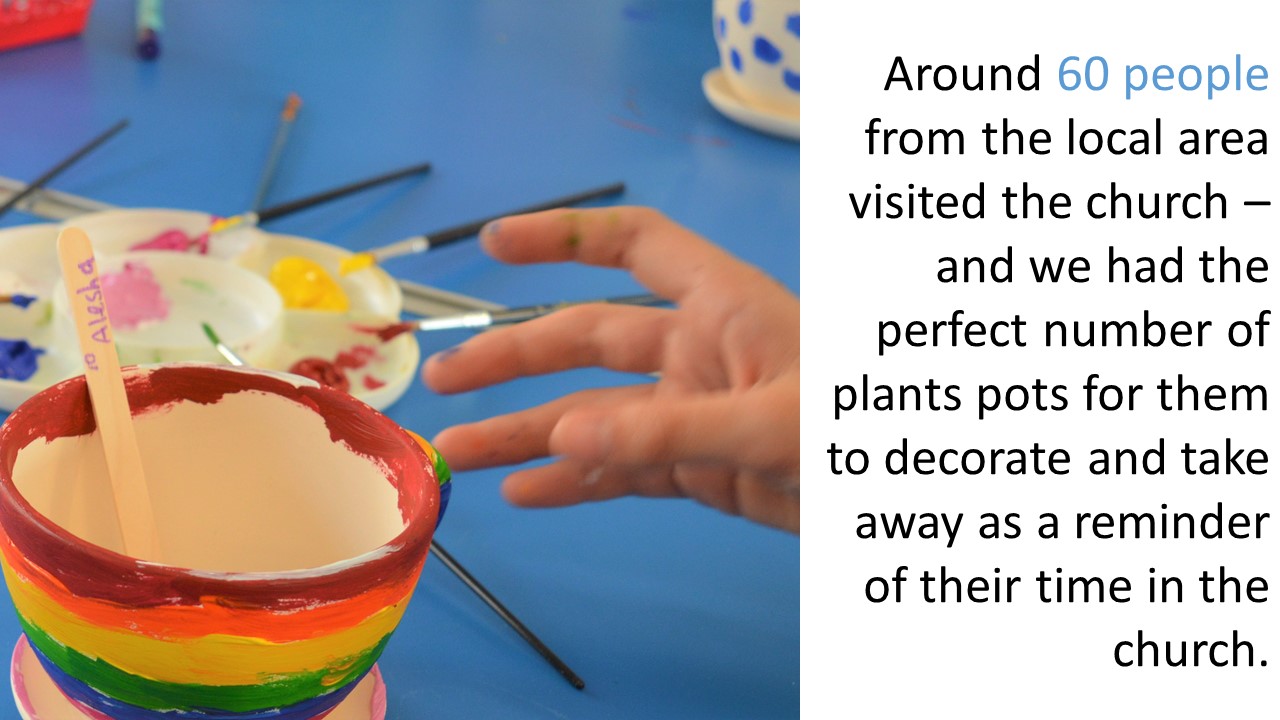 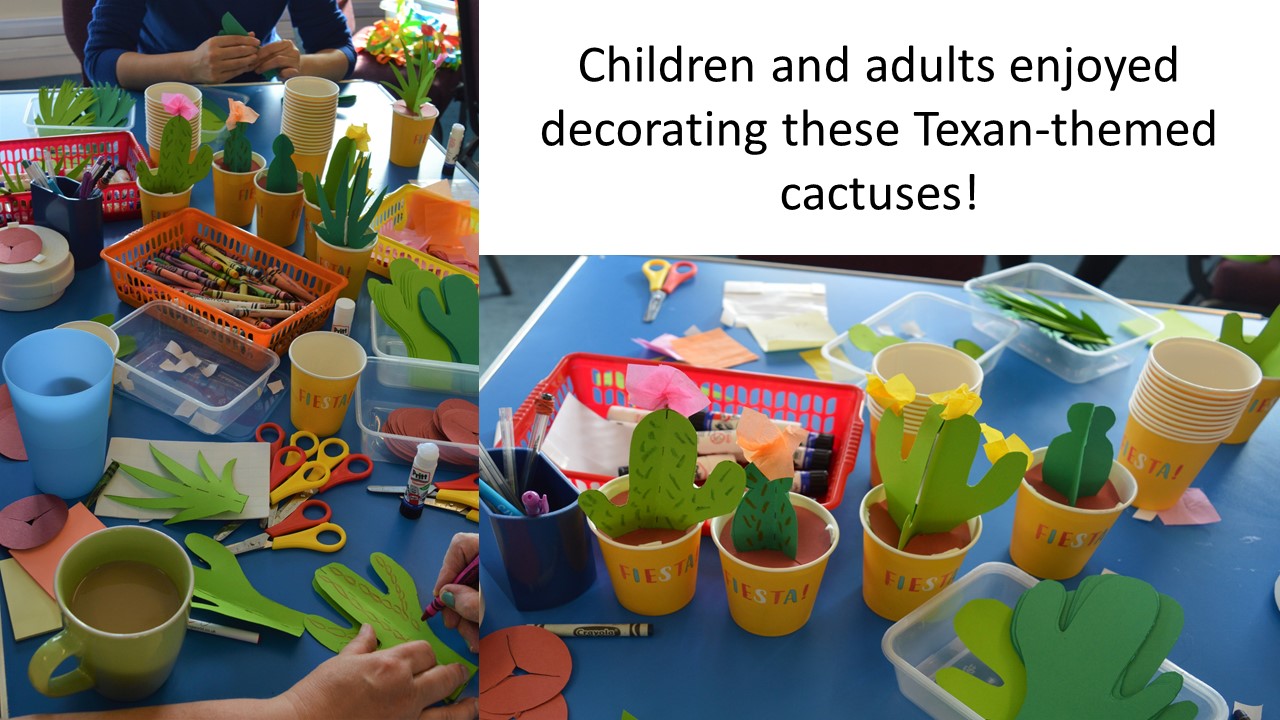 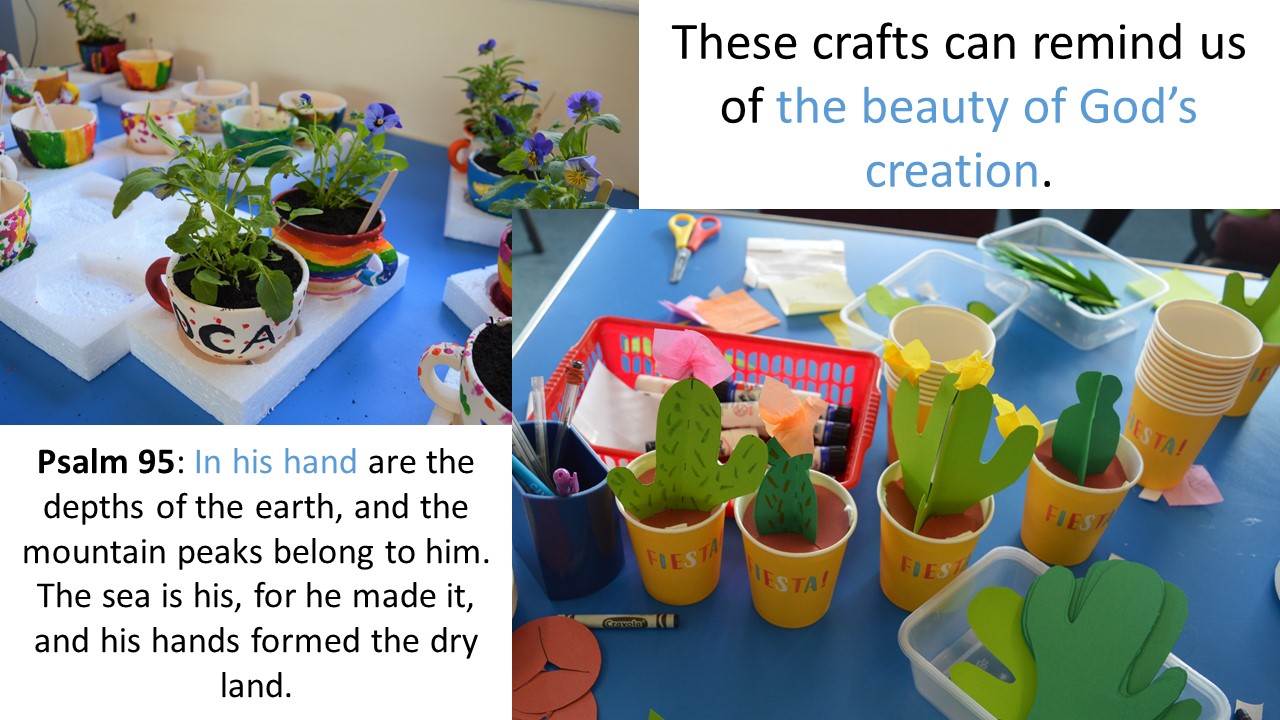 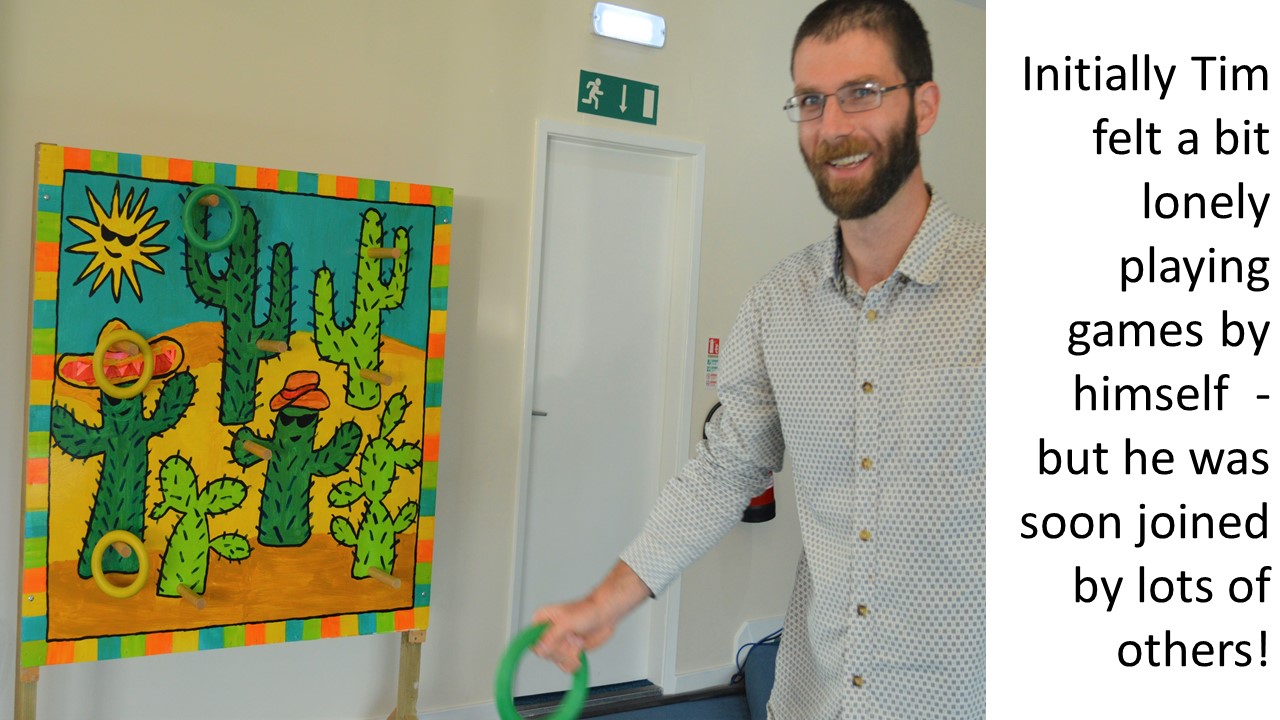 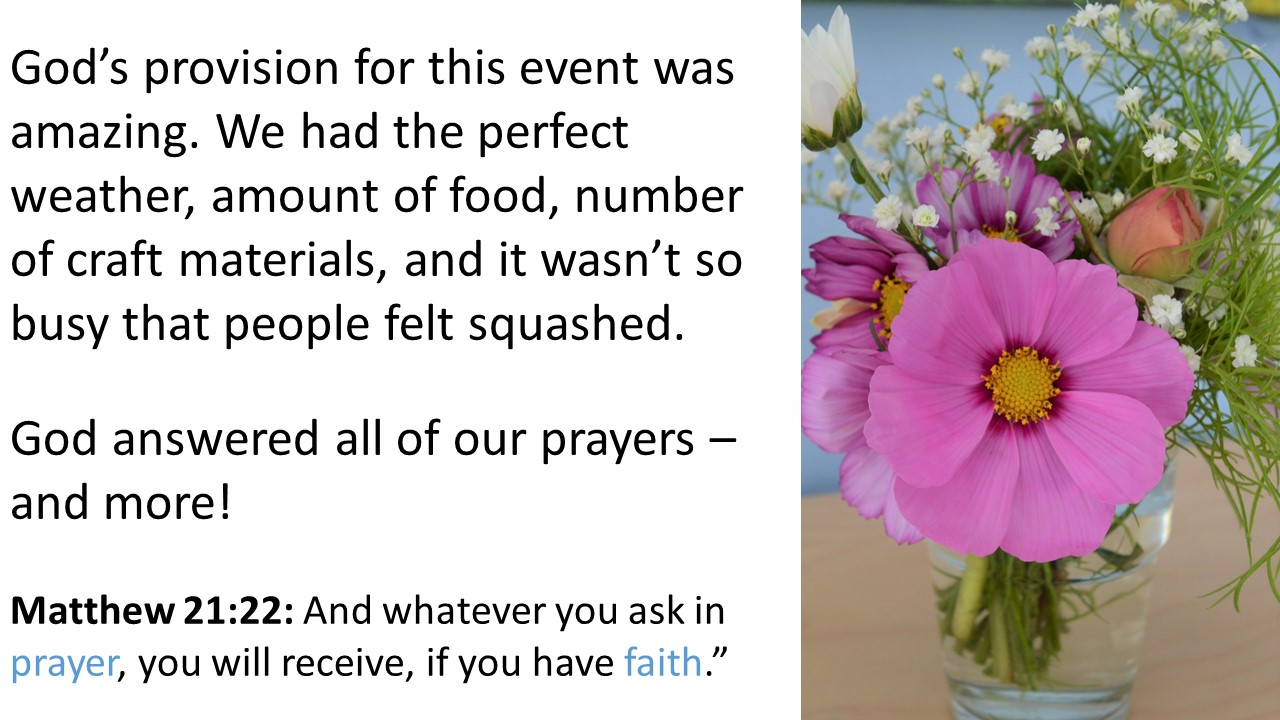 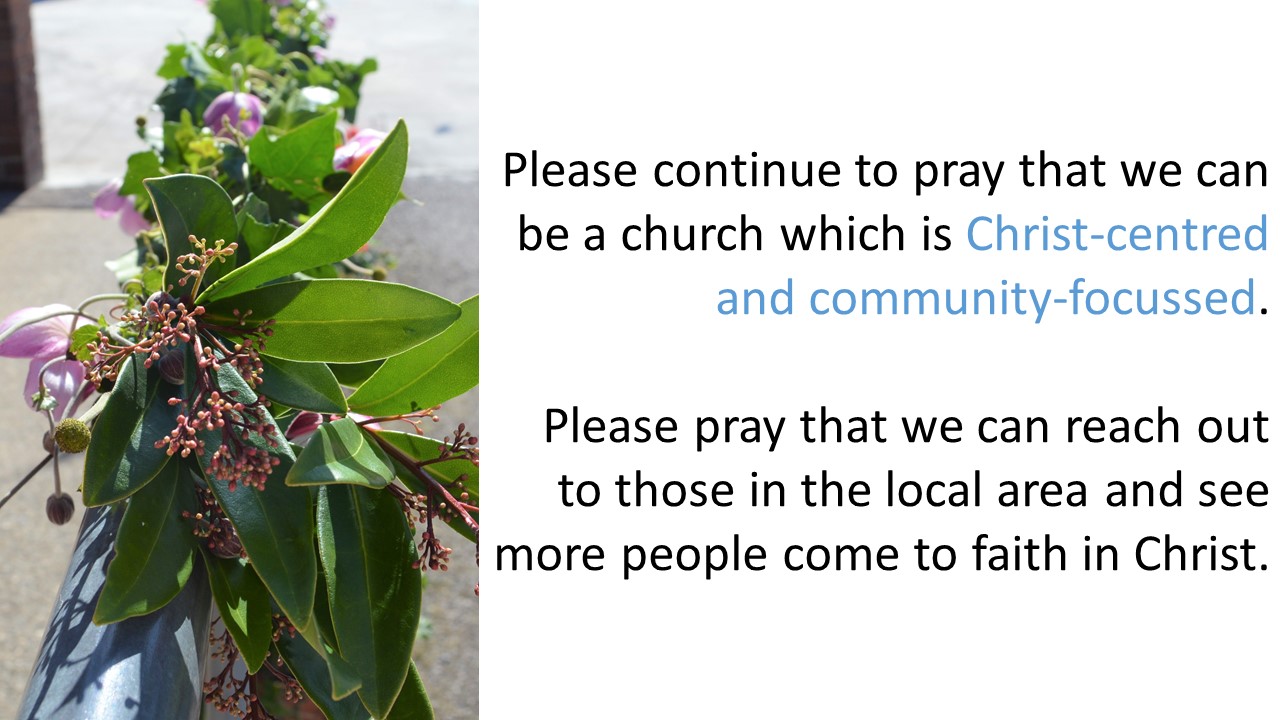 Heroes is our weekly children’s group (find out more about it here) and they have had a very busy two weeks. Old friends and new have come along to play ice breaker games and get to know one another. Whilst thinking about how God has created each of us differently but loves us all the same, the children have been making paper flowers to decorate the church building for Saturday’s Indoor Garden Party.  Everyone is welcome to this free event, which will involve food, craft and games. It starts at 3 pm on Saturday. Hope to see you there! 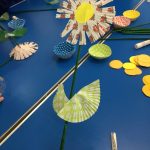 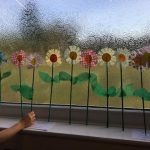 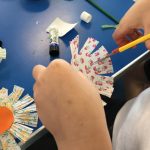 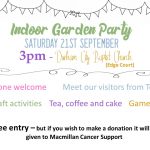 At least once a fortnight, we provide an opportunity for members of the congregation to share with the church during the Sunday service. Sometimes people share about their work with local and global charities, others speak about how God has worked in their lives, and some give an insight into their role in the church and how we can all get involved.

This week our treasurer, Janet, spoke about where our church’s money comes from and how it is spent. She reflected on 2 Corinthians 9:7, which says:

Each man should give what he has decided in his heart to give, not reluctantly or under compulsion, for God loves a cheerful giver.

We need to plan and pray about how much we all give to the church as it is really being given to God. It’s a privilege to be able to serve God not only with our time and gifts, but also with our money. As a church, DCBC gives away a tenth of our income to help our Baptist family in this country and overseas. A lot of money is also spent on the church building, and Janet explained how making the building welcoming to everyone who uses it is part of the church’s mission. The next opportunity for this is our Indoor Garden Party, which will take place on Saturday 21st September, from 3-5pm. Everyone is welcome for afternoon tea, crafts and games. The event is free, but any donations will be given to Macmillan. 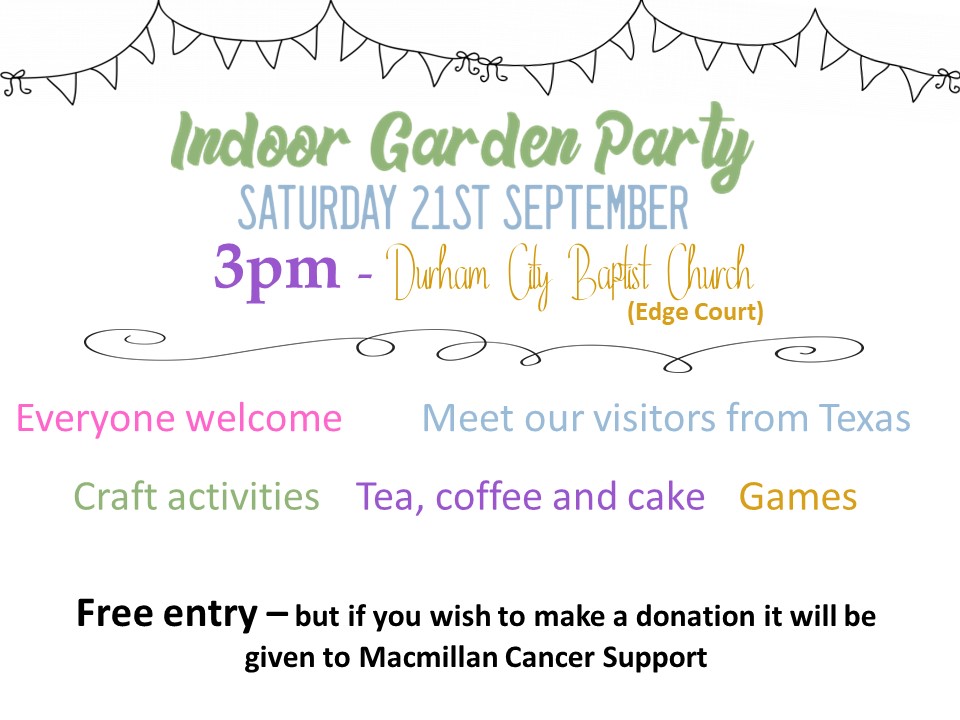 This morning we choose to read the story of Jonah as part of our café church series (the first Sunday of every month at 10.30am). Or, rather, we decided to act it out and illustrate it with some clever hand-made fish. Stretching the theme to its limits, we had a DCBC classic meal – fish-shaped fish and chips. 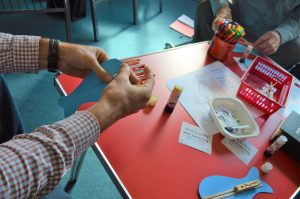 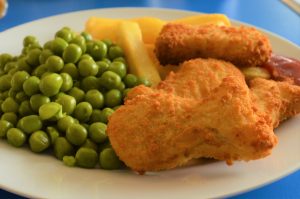 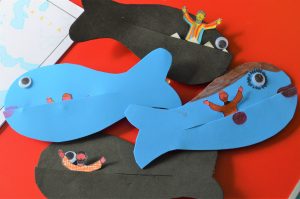 The focus of the service was that we have a God of second chances. When God first called Jonah to do something difficult, the first thing Jonah did was run away. But Jonah got a second chance to do the right thing – and he needed a third chance at the end of the story too! The sailors Jonah meets on the boat to Tarshish and the people of Ninevah also get a second chance – and as soon as they find out what God wants them to do, they transform their lives and follow him. So this week we are going to think about what God might want us to do with our lives, and how we can take the second (or third, or fourth, or millionth) chance that he is offering us.

This week has been a busy one for some of us at DCBC – we have started redecorating our small hall. The exposed brown bricks have been transformed with a lick of paint (well, actually about 10 litres of it) and we have brightened up the room with some re-upholstered chairs. There’s plenty still to do – but already the space looks a lot more welcoming for the different church groups that use this room during the year. This room is used for our weekly children’s work (Heroes and GB) for church meetings, and can be hired out. It is also used for our Christmas Fun Day and Fair (get the date in your diaries now – Saturday 30th November, 10am-12 noon). 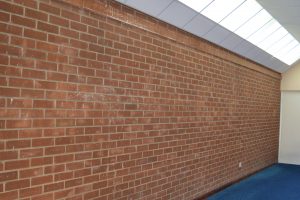 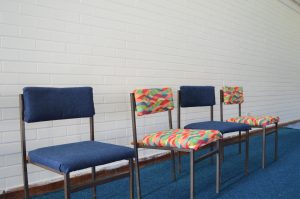 Over the past couple of months at DCBC, our regular church services have included short presentations on a whole range of topics, including Open Doors and the Baptist Missionary Society. The purpose of these presentations is to raise awareness of issues affecting Christians in our local community and around the world, as well as promoting ways in which we can actively support these causes.

The first presentation looked at the issue of homelessness in the UK and what can be done locally to support those who find themselves homeless or vulnerably housed for whatever reason.

An organisation that works locally is Handcrafted Projects, which renovates houses for and with homeless people and provides training in a variety of skills (such as woodworking, bike maintenance, and basic cooking skills). One of our church members has volunte 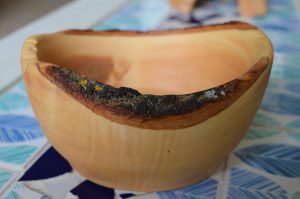 ered with this charity for about 2 years and he helped us to support this organisation by running a fair after the service at which woodcrafts could be purchased or commissioned.

You can find out more about Handcrafted at: https://handcrafted.org.uk/

At August’s café church service (the first Sunday of each month at 10.30) we heard the story of Jesus feeding the 5,000 from just 5 loaves of b 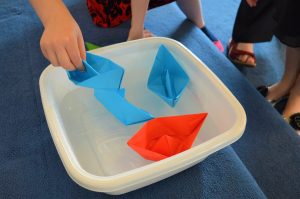 read and 2 fish. By doing a quiz on different types of bread, we realised just how fundamental it has been throughout human existence (and how important it remains today too). Talking about this story was a wonderful opportunity to reflect on God’s provision for his people – providing them with exactly what they needed at the right time.

If that wasn’t miraculous enough for one week, we then heard that Jesus had gone on to walk on water! (Unfortunately not all of our origami boats managed the same feat.)

e was followed by some delicious sandwiches and a time of fellowship.

The next café church service will be at 10.30am on Sunday 1st September. 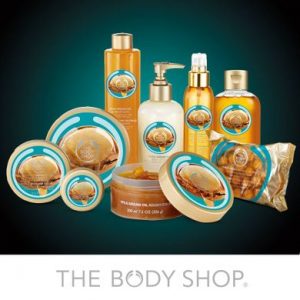 A talk by a Body Shop representative on their ethical outlook in producing beauty products.

An opportunity to try and buy Body Shop products.

The Spirit of the Lord is on me,
because he has anointed me
to proclaim good news to the poor.
He has sent me to proclaim freedom for the prisoners
and recovery of sight for the blind,
to set the oppressed free,
to proclaim the year of the Lord’s favour.’

‘Today this scripture is fulfilled in your hearing.’

God in Christ did not just come to save souls for heaven; he also came to bring shalom and flourishing here in this life

Nicholas Wolterstorff, “In This world of wonders.” Page 55.

Two sections of the gospels are often called manifestos; “The Sermon on the Mount has been called “The Kingdom Manifesto”. The other section is that which is found in Luke 4:16-21, and it has been called; “The Nazareth Manifesto”.  It is the section in Luke that we will be considering in this piece. I presume the term manifesto is used because the quote, predominantly from Isaiah 61, is used by Jesus to speak of his mission.

Jesus in using this text also draws attention to the nature of his person.  At his baptism Jesus is declared as God’s son, resonating with Psalm 2, and therefore King.  Jesus is the one in whom the Father is well pleased, drawing on the servant of the Lord in Isaiah 42:1. The section from Isaiah 61 while not belonging to the servant songs of Isaiah, (Is. 42:1-4; 49:1-11; 50:4-9; 52:13 – 53:12) can be described as like a servant song. Finally the proclamation of God’s word by the one spoken of in 61:16:21 resonates with the prophet who was to come found in Deuteronomy 18:15 & 18.  Luke uses the titles and the texts that contain them in such a way as to reveal Jesus as the bringer of God’s salvation.  The one who could declare the year of the Lord’s favour because he was God come amongst his people, in the person of the Son.

Jesus had the authority to proclaim the fulfilment of the scripture, the year of the Lord’s favour had begun.  What was Jesus intimating when he sat down and said ‘Today this scripture is fulfilled in your hearing?’ Jesus was announcing the long awaited deliverance of God’s people from all that made them less than they should be.  Isaiah’s prophetic word concerned the deliverance of Judah from exile in Babylon; however it finds its greater fulfilment in the liberation that Jesus made possible through his life, death and resurrection. Jesus was announcing the full salvation that God had promised was coming into being through his person and work.

One discussion that surrounds the text in Luke 4 concerns whether Jesus was speaking of spiritual realities, or physical realities?  The answer is the salvation God brings about in Jesus is for the whole person. The separation of the spiritual from the physical in the biblical understanding of human persons is not as easy as some think. God is concerned with the whole person.

The language at use in the text is not that of social political revolution, but of the in breaking in of the kingdom of God in liberating and saving power, this is the true renewing of the world. In Jesus the order of the new creation is breaking in. This is the new community under the sovereignty of God, empowered by the Spirit of God, coming into being as a sign and prophetic voice to a world that needs to experience the saving, liberating power of God. This new community is made up of those who accept Jesus and his message and experience the liberty of the children of God.

Those who are called to be part of this new community are also charged with proclaiming the arrival of the year of the Lord’s favour with the coming of Jesus.  We are to proclaim the message and live as those who seek to bring the good gifts of God to all.

We are a Christ-centred, community-focussed church at the heart of Gilesgate, Durham City. Drop in at 10.30 on a Sunday morning to meet us at our morning service or check out the tabs above to see what happens here during the week.